About the UK Hydrological Outlooks Portal

The Portal allows users to visualise the model outputs from the Outlook, both spatially and in the form of a number of time series. This allows users to explore the hydrological forecasts for the next one to three months, and sometimes beyond.

These outputs provide information on the likely trajectories of river flows a season or more ahead, and their production is intended to help support water resources managers in their decision-making. Importantly, however, as with all forecasts, these outputs are based on model projections with many uncertainties, so should be used with caution. Users should be aware of the methodologies used to make the forecasts, and their attendant uncertainties, as described on these pages and in further references.

There are three different forecasting approaches used for river flow forecasting in the Hydrological Outlook:

In addition, this portal includes some regional information on current conditions from a 1km gridded Grid-to-Grid (G2G) hydrological model run. The 1km maps will be accessible in a future version of this portal.

The current conditions results presented here are based on using weather observations up to the forecast origin as input to the high-resolution Grid-to-Grid hydrological model (G2G) to provide a 1km gridded hydrological initial condition (HIC). Further information is provided on the relevant sections.

The current conditions are not forecasts as such, but an indication of current hydrological status, at the end of the preceding month.

The Ensemble Streamflow Prediction (ESP) outlook, or Outlook by historical climate, is based on monthly ensembles of historical sequences of observed climate (rainfall and potential evapotranspiration) that form input to a hydrological model. The outputs are probabilistic simulations of the average river flow over the forecast period (one to twelve months ahead), at each location. The simulations are generated by the GR4J conceptual rainfall-runoff model from INRAE (France), calibrated on observed flows.

These forecasts are available for a set of 300 catchments around the UK for which GR4J models have been established. On this portal, catchment-scale projections are available to enable users to explore the ensemble of river flow projections over the next one to twelve months at each site.

Detail of the modelling set up, and the skill of this method have been published in:
Harrigan, S, Prudhomme, C, Parry, S, Smith, K, and Tanguy, M. 2018. Benchmarking ensemble streamflow prediction skill in the UK. Hydrology and Earth Systems Sciences.

The model generally performs well across the UK, but there are important variations in skill. In addition, there are biases in the forecast river flows relative to observations, and these should be taken into account when examining catchment-scale river flow forecasts using this method.

This framework for national hydrological outlooks combines a hydrological model (Grid-to-Grid or G2G) estimate of total subsurface water storage (in both soil and groundwater) and across Britain with a range of seasonal rainfall forecasts provided by the Met Office to provide estimates of area-wide hydrological conditions up to a few months ahead.

Specifically, the Water Balance Model (WBM) results presented here are based on driving the monthly-resolution water balance model with ensembles of UK-mean, monthly resolution seasonal rainfall forecasts provided by the Met Office GloSea5 prediction system and the HIC to forecast regional mean river flows for the next 1 and 3 months. Despite the relatively low temporal and spatial resolution of the rainfall forecasts (currently at a monthly time step and national-scale), they can be used to provide skilful river flow forecasts on a regional and national scale when combined with the high-resolution hydrological-model-simulated estimate of the HIC. 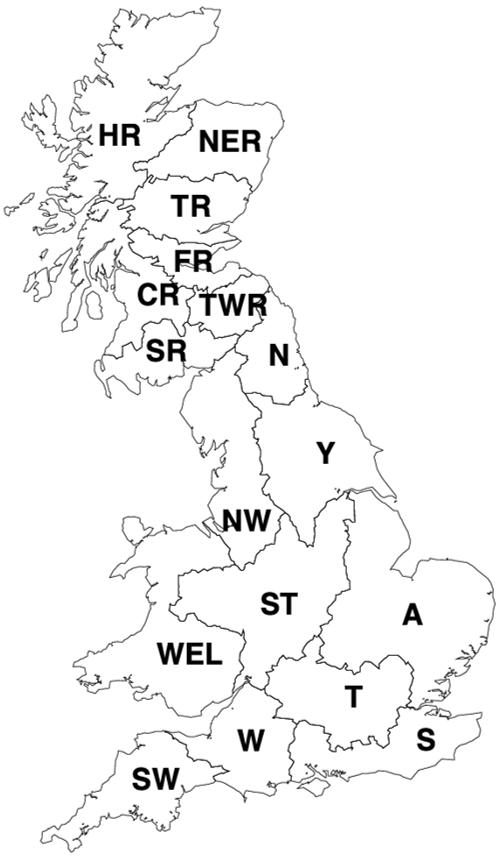 This approach differs from the previous two in that it is not based on hydrological models, but on a statistical approach based on past river flow data.

The results presented here are based on two main types of methods; Persistence and Hydrological Analogues. As the name suggests, persistence is based on the assumption that the observed river flow will carry on into the next month. The hydrological analogues method is based on selecting the previously observed sequences of flows that are the most similar to the recently observed past, and using these to project forwards.

For this approach for each of approximately 90 locations in the UK, the forecast from the method with the higher confidence (best performance in the past) is presented. A simple classification of flows into high, medium and low is used, as indicated by the colours of the dots on the map. The medium range includes the middle 44% of flow magnitudes. The confidence of the forecast is represented by the size of the dot. To be included, a forecast has to have a hindcast correlation (correlation between past forecasts and observed data) of at least 0.23, and be significant at the 95% level for a one-sided t-test. The outline of the dot indicates which method has been used at each location: a solid line for Persistence and a dashed line for one of the Analogue methods.

The Outlooks from the Hydrological Analogues methods are based on a comparison of the river flows during several recent months with flows during the same months in previous years. The years with the observed flows that most closely resemble the conditions in the recent months are identified as the best historical analogues. The Outlook is then derived by averaging the flows in the following months (the forecast duration) in these analogue years, giving a higher weight to years with more similar analogues. This is the Weighted Mean forecast. A variant of the Analogues method called the Shifted Weighted Mean forecast involves shifting the Outlook up or down so that the flow in the most recently observed month matches the weighted mean from the analogues in the corresponding month. The historical analogues are six months long for the one-month forecast, and nine months long for the three-month forecast.